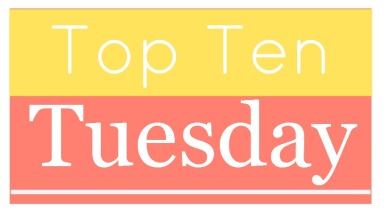 Top Ten Tuesday is a meme created and ran by The Broke and the Bookish. Each week a new top ten list idea is posted, inspiring readers and writers to rack our brains to find ten of something. This week the prompt is “Ten Characters You Just Didn’t Click With.” This had me going through my Goodreads Account for inspiration, as I could only think of one or two off the top of my head. I was able to find 10 with some serious digging. I didn’t want to use multiple characters from the same book, and I didn’t want to pick characters that were meant to be bad or off in some sort. So below are my ten characters!

Top Ten Tuesdays: Characters that made me want to kick them while reading on multiple occasions (but in a gentle manner…)

#1. Sookie Stackhouse of The Southern Vampire Mysteries by Charlaine Harris

I admit, I read this entire series. I spent my last few years of college reading some heavy literature, including a semester on Eastern European Lit of the 20th Century. I balance out my intense reading with pure fluff. NOTE TO ANYONE READING THE SERIES: Stop after Book 7. I took the hit for you.

Anyways, Sookie always drove me nuts. She was just…too much, and then the fairies came into play…..and she doesn’t even end up with who she should. If you read 13 books of a series, the main character should end up with a guy she’s dated at SOME POINT IN THE SERIES! My finishing this series despite the fact my favorite characters all but disappeared (Pam and Eric, all day) was like finishing a half marathon because you are 12.5 miles in and be dammed you won’t finish it! Vampire lovers. I don’t think I’ve read one I like yet

#2. Eadlyn Schreave of The Heir by Kiera Cass

I read the first three books of this series in a day and a half, and then drug my feet on reading the fourth book. While I enjoyed the series, I’m not certain I liked America Singer either really (MC of the first three books). A cast system and reality tv in a dystopian land? Sure, I’m game.  But I definitely didn’t care for Eadlyn Schreave. She was hard to empathize with, and I found incredibly whiny. I’ll finish the series though, mostly because I don’t leave series unfinished (see above).

I felt that this character literally did everything they were told not to do. Okay, a lot of characters do this, but he did it in such an obnoxious manner. I didn’t care for his girlfriend Parvati or his friend Preston either. I couldn’t have sympathy for him. This book took  me a month to read, and I guess it still isn’t sitting well with me.

#5. The entire cast of Pretty Little Liars by Sara Shepard

I won’t finish this series. I won’t, dammit self. I read this series because I liked the tv show…or well, the first two season. (I have watched all of it now. I’m still debating how I feel). I read 10 of the 16 books. None of the MC – there are four of them – have redeeming qualities. They just get worse and worse.

Vampires. Vampire hunters. If they aren’t Buffy, I can’t seem to get on board. Especially vampire hunters who sleep with archenemies.

#7. Robert Langdon of The Lost Symbol by Dan Brown

I loved the first book of this series. I enjoyed the second one. I think the author’s own arrogance and “look at how smart I can be!” came out through Robert Langdon. Who, I admit, I have a hard time separating from Tom Hanks. I’m giving his newest one Inferno currently. Given that they didn’t make a movie about The Lost Symbol and they are of his newest, I may not be the only one who thinks this….

#8. Elizabeth Darcy of The Phantom of Pemberley by Regina Jeffers

Seriously. Are there any good sequels to Pride and Prejudice? I don’t really recommend this one. Elizabeth is a strong willed, stubborn headed, knows-who-she-is-no-matter-the-insecurities woman. But in this one? She’s a bit wishywashy, too lovey-dovey, and she doesn’t butt heads with Darcy at all. No.

#9. Catherine Land and Ralph Truitt of A Reliable Wife by Robert Goolrick

I read this book under the impression that it would be a wonderful Gothic book. It was not. The husband is too wishy-washy and such a Gary Sue, and the wife is worse. She is deplorable and awful and URGH. Don’t put an ad in the newspaper for a wife, good lord.

I bought this book on a whim on an Amazon run a long time ago. The premise sounded good, so why not? The character doesn’t grow, she just get’s crazier and crazier, but not in a character growth kind of way. A hot mess isn’t even a good classification for the main character. And the ending fell flat…. it’s just not the read.

So there you have it — my odd collection of disliked characters. Am I being too harsh on any of them? Let me know!

11 thoughts on “Top Ten Tuesday: Characters I Just Wanted to Kick (in a gentle manner…)”