I started off the year with a BANG! I’m curious to see what tops this book this year. 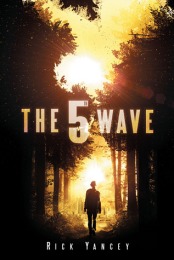 Cassie might be the only human alive, but she’s not going to stop searching for her brother. In fact, she’ll continue to go through the world thinking she is the only human left, trusting no one. Life has gotten quite difficult since the Others appeared in the sky. Since they appeared, there have been four waves that is killing off humanity. 1st Wave: darkness, 2nd Wave: tidal wave causing earthquake, 3rd Wave: plague, 4th Wave: trust no one.

The Others have infiltrated earth, looking just like all other humans. Their only exception: they kill anything they see. She meets up with Evan Walker, another lonely human survivor who agrees to help Cassie find her brother.

Told from multiple points of view, this book is an exciting post-apocalyptic adventure.

Cassie Sullivan – Cassie is a 16 year old girl, convinced she is the last human alive. Except that she has to keep hope that her baby brother, Sammy, is still alive, or she would lose all reason to keep fighting. She was an average high school student, in love with a guy named Ben Parish. She totes around Bear, her sole companion, occasionally chatting with his judgmental self.

Sammy Sullivan -Sammy is a five year boy and Cassie’s younger brother. At the survivor camp, he is taken away with other kids on a bus to an unknown location. He gave his stuffed bear to Cassie to keep her safe at night while they are separated. He’s a huge Star Wars fan and hopes that he can fly an X-fighter into the Others and save the day.

Evan Walker– Evan is a mysterious teenager that saves Cassie’s life. He, like most other humans still alive, has lost his entire family. He does a lot of hunting and agrees to help Cassie find her brother.

Zombie – Zombie is found nearly dead and diseased, harboring extreme guilt about his sister. He is saved in time and joins the cause against the Others. He is roughly 17, former football star, and former all around American Mid-Western boy.

Ringer – Ringer is another soldier kid that joins Zombie’s platoon. She’s a good shot and is gunning for a Sergeant position. She and Zombie become comrades, if not friends. She doesn’t have a huge part in this book, but I get the feeling she will in the sequel(s).

I’m not the biggest sci-fi nut, but I do love the occasional alien story. I’ve seen all the Star Wars, sure, but I haven’t read all the books and such that go with the fandom. I’ve read a few of the Ender’s Game series, but I am not itching to finish it. This is probably why I hadn’t really heard of The 5th Wave, prior to seeing the preview with Chloë Moretz in it. (I don’t know why, but I super enjoy her. I think it’s something about supporting Georgia peoples.)

I read a description that said this book was like The Road meets Twilight. I can’t refine it now, which is probably a good thing, because….don’t compare books to Twilight guys — at least not in a good way.

And don’t ever put Cormac McCarthy’s The Road in the same sentence as Twilight.

I’m glad I gave this book a try despite that.

This book did remind me of The Road a little bit — a less depressing and less hopeless (like I picture The Road constantly in grey tones, while this one has more green and a little brighter?) Cassie is probably how most of us would be after an apocalypse — surviving because of some random, obscure reason that may only make sense to her.

I actually liked the multiple points of view in this novel, even when it was from Sammy’s POV. Maybe even especially? There is no overwhelming sense of thought or hope that humans will survive on the whole, no sudden deus ex machina so far.

The romance story in the book is…interesting. To discuss it would spoil quite a bit, but it’s kind of where I understand the Twilight reference. Evan Walker is a bit of a creepy stalker, but Cassie, instead of finding him super protective and wonderful, tells him that he’s being super creepy. I’m not invested to any major extent, but I’m curious to see what’ll happen.

I’ve seen some people complaining about the aliens. I loved Animorphs growing up, and the Others vaguely reminded me of yeerks. Maybe this is why I didn’t dislike them at all. It’s creepier to me when an alien hides  among humans rather than just blow them up.

Loved it. I recommend it to everyone!

I sent it to my brother as a recommendation — I should interview him one day on his thoughts on the books I recommend to him.

I’m curious to see how the movie will turn out. January releases are quite a death note, and it doesn’t look the best, but hell, I’ll go see it.