Skip to content
Posted on April 24, 2016 by Megg Griffin Posted in Book ReviewTagged A Thousand Pieces of You, Claudia Gray, Felicia Day, Sarah Rees Brennan, Tell The Wind and Fire, Ten Thousand Skies Above You, You're Never Weird On The Internet (Almost)

I have been avoiding WordPress out of guilt. My health hasn’t been great, so a good portion of my days are spent dedicated to getting through work and normal things. Blog posts have, unfortunately, slipped in importance on my list. But time to rectify that!

Below is a collection of six reviews of the books and graphic novels that I’ve read over March and April. I’m glad that I’ve at least kept that resolution alive (I’ll review my list and get back on those soon…) This will put me two behind, but I don’t like the idea of condensing a V.E. Schwab book review.

Tell the Wind and Fire by Sarah Rees Brennan 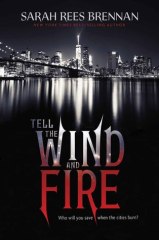 This was an ARC provided by NetGalley when I read it, but I failed to actually post an update before the release date. This book had me sold on the premises of being an updated A Tale of Two Cities with a magical element. The cover is of a beautiful New York City skyline, so okay… I’m easily swayed.

Unfortunately, I had a difficult time getting through this book. I didn’t care for any of the characters, specially not the main character, Lucie. I think this book would have benefitted from starting Lucie’s stories years before the book began, giving it more buildup and tension. Instead, I felt like I was reading the second book of a series that I probably wouldn’t have picked up if I had known the main character was so wishy-washy. She doesn’t seem to have any redeeming value, and has somehow lucked into everything. Even the love triangle seemed forced, leaving me scratching my head as to why it existed.

I just…there was such a good concept here, but it’s so glazed over leaving the focus to be on some ridiculous love story of teenagers. Except that the action does seem to pick up towards the end, but by that point…I wasn’t interested. Maybe I am too old, or maybe I just didn’t get it, but this book was not for me.

A Thousand Pieces of You (Firebird #1) by Claudia Gray 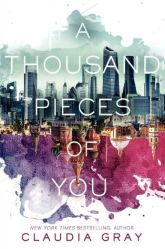 I’ve had this audiobook on my phone for awhile and decided to give it a try while on a plane ride home with a sinus headache. I couldn’t focus on a book or sleep on the flight and desperately needed to focus on something.

This is a bit of a predictable YA novel, but I rather enjoyed it on a simply level. And I completely love that I listened to it as an audiobook rather than reading it, as when Marguerite jumps universes, she ends up with different accents. The story starts after Marguerite’s father has been killed by his graduate student, Paul, before he jumps into an alternate universe to hide with the help of the family’s invention called the Firebird. Marguerite goes chasing after him with her best friend Theo, and as they continue jumping universes, she begins to realize that she’s been lying to herself about her feelings about Paul.

I kind of didn’t realize that this book was a love story, much less a love triangle story, but again, the lightness and simplistic was what I needed at the time. I probably won’t read the series again, but I’ll at least finish it.

You’re Never Weird on the Internet (Almost) by Felicia Day

Well, I finished one audiobook, so might as well listen to the other one I had on my phone! This one I listened to on a drive to and from CT. I am not a huge Felicia Day fan, but I have absolutely nothing against her. Realistically, I am just a sucker for autobiographies about successful women who are a bit awkward. It gives me hope I guess?

Felicia Day is a fascinating person. I knew she was an internet capitalist and geek gamer girl, but I didn’t realize she was an amazing violinist and incredibly brilliant person. She’s an actress because it’s her dream, even though she could probably have ruled the world or been CEO of a company by now.

The last bit of the book is what got to me the most — Felicia’s stance on GamerGate. Gamergate is something I’ve actively avoided, because it absolutely frightens me. I listened to the chapter on what happened twice, fueling my anger for the internet. And then I stupidly read comments about it….fueling my anger even more.

Either way, I definitely am a bigger fan of Felicia Day and still supportive of all awkward awesome females. And I always recommend reading autobiographies.

Ten Thousand Skies Above You (Firebird #2) by Claudia Gray

I start a series, I finish a series. More universe hopping, more romance drama. More predictably, and a FLIPPING CLIFFHANGER.

Marguerite has to go to multiple universes to find all the pieces of her beau, Paul’s soul. Her enemies are smart in their attempt to destroy everything, and their reasoning behind it was surprisingly not as predictable. Marguerite ventures into new universes, with a few returning ones as well. Theo helps out again of course, wanting to save his best friend.

I enjoy the world building. I have always loved the idea of multiverses, and would absolutely love to see how other Meghans are doing out there. One has to have already sold a novel by now, no? ….or at least have finished one?

I was frustrated with the characters and the length of this book. Some of the drama felt like it was created just to exist. But overall, I enjoyed the book and despite the cliffhanger, I’ll read the third book. 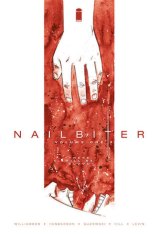 I hesitate to review a graphic novel as I am so new at reading them, but I couldn’t make a post without mentioning Nailbiter. I am a sucker for serial killers and conspiracy theories, and this is a twisted collection of both. The artwork is occasionally gruesome, but the serial killers (Buckaroo Butchers) are AMAZING. Y2K killer, Silent Movie Killer (one that kills people who talk during movies), Blonde (one that kills men who cat call her), Crossbones Killer who creates crossbones out of people, Clown Car Killer who was obsess with seeing how many people he could fit into a car….

The story revolves around an NSA agent trying to figure out why so many serial killers are coming out of Buckaroo, OR. He has to team up with a small town sheriff and a known serial killer — Edward “Nailbiter” Warren to do so.

This collection has been my favorite of graphic novels I’ve read thus far. Volume 4 came out in April, so the individual issues will be making it into my monthly rotations.