How do you like your dukes? Grumpy? Tortured? Alpha, beta, or alpha in the streets, beta in the sheets?

I recently started the Reluctant Royals series, because of my podcast’s book challenge list. Stephanie and I chose the first book as our romance book, and because we loved it so much, we read the first novella for our queer romance book! I immediately put this book on hold after finishing the first book and grabbed the second novella as well. While all of these books can be read on their own, it is worth starting at the beginning of the series to get a better grasp on who everyone is. 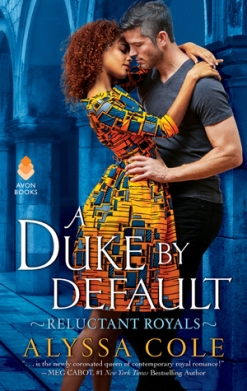 A Duke by Default

Portia is in need of a make over on her life. She’s tired as being seen as just a NYC socialite and hot mess. She’s tired of disappointing her family and friends and being a burden. So when an opportunity comes up for her to put her skills to the test in an internship in Scotland, she decides to take it.

Tavish McKenzie owns an armory, and is very annoyed to have a spoiled American come in and tell him everything he’s doing wrong. Even if what she comes up with makes sense and helps the business flourish.

Both are attracted to each other, though neither wants to admit it. Portia is on a no boys and no booze cleanse, while Tavish is surely too old for Portia. But when Portia accidentally finds out that Tavish is a duke, can the two set aside their feelings to help help Tavish get his position?

Portia Hobbs – NYC socialite. Brilliant, loves so many different subjects but can’t settle down on anything. Finds herself to be a constant disappointment to her family, and feels guilty about how she treated her twin sister Reggie years ago. First met her in A Princess in Theory.

Tavish McKenzie – A Chilean and Scottish man, running the Bodotria Armory with the help of his half brother and sister-in-law.

Jamie – Tavish’s half brother. He runs some of the workouts at the Armory. Married to Cheryl. Chilean and Jamaican.

In two short months Alyssa Cole has gone from an author I know exists to an author that I’ll probably auto-buy everything she owns. Her Reluctant Royals series are like fun fan fiction-y stories that are then grounded in real life modern dilemmas. For A Duke by Default, the underlining modern issue is immigration and the desire of those in power to keep the “filthy immigrants out.” How is this handled?

Well, for starters, our leading man is a biracial son of an immigrant and a Scottish duke. We don’t know that he’s the son of a duke (well okay you do if you read anything about the book before going into it, including the title). And secondly, he’s living in an area that gentrification is trying to take over. Someone keeps trying to buy the Armory and other buildings out from under Tavish. Silly me, I thought gentrification was just an issue in urban America….yeah I am probably a bit sheltered in that regard.

We met Portia in A Princess in Theory. We don’t get too much of her, other than she’s definitely a hot mess, and she definitely schemes against her best friend. It may have been with the best intentions, but it was still definitely a scheme. So I wouldn’t say I was jumping to read Portia’s book (honestly Scotland sold me more on this book), but I am glad I did. Portia has layers that we missed in book one. She’s brilliant, but not ready to commit. Or maybe she can’t commit, she starts to realize, which is to no fault an issue with ADHD. Still, being in a different country than her parents and sister helps her start to find her place in the world.

I did have a few issues with this book that I didn’t with A Princess in Theory. This book focuses on the dysfunctional relationship with Portia and her family. While some of that is resolved with her sister, it feels completely dropped when it comes to her parents. Yes, the added bonus of Cole’s work is that it feels like you are getting a snapshot of a love story — while they are happy endings, they are not Happily Ever After endings — so I can begrudgingly see how wrapping up all of Portia’s issues by the end wouldn’t be right. But I just wanted one scene where she’s telling off her parents. Or at the very least, standing up for herself to her parents.

The second issue I had was the age gap. More specifically, it was made to be a bigger deal than I felt like it was? I could see if Tavish thought that Portia was much younger than she is, but she’s roughly 30. The age gap is less than ten years. I’ve dated in that age gap. I honestly prefer to stick around that age gap. But it made me actually laugh every time Tavish has angst because of his grays. Please. Some of us gray prematurely. (It’s me. I found my first gray hair at 16.)

And I just love a good salt and pepper look, what can I say.

The romance in this book is fun. Both Portia and Tavish are way too selfless, which is a stark contrast to the Portia we saw in book one. But it does lean into how great of a person she is and friend she tries to be…even if she goes about it the wrong way.

If you are looking for a book on how to make swords, this book is (shockingly) not for you. If you are looking for a romance story that also features a woman realizing she is incredibly intelligent, finds something she’s good at doing, and works to gain the respect of the most important person: herself (all while a gorgeous Scotsman just happens to be around) then give this book a shot. And the rest of Alyssa Cole’s books because… amazing.