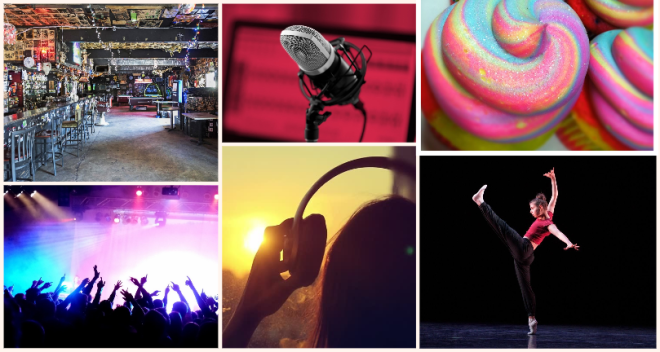 Love is…it’s bringing an umbrella when rain is forcasted, but, like, not for you.

Happy Book Birthday, Erin Hahn! And thank you Netgalley and St. Martin’s Press for a copy of this book in exchange for an honest review. Let’s dive into this YA Romcom of a book!

Luke is a fairly popular British podcaster and son of former punk rocker Charlie Greenly.
Vada Carsewell is an up and coming music blogger who is ready to go off to college and take on the music world.
Both are too shy to really talk, until a school assignment pushes them together.

Okay, as someone who is both a podcaster and a blogger, I was immediately down for a rom-com story between the two types. While I was hoping for something a little more similar to You’ve Got Mail vibes, I did enjoy the story here! Vada and Luke are passing acquaintances in school and because of the bar that brings them together (a bar owned by Vada’s mom’s boyfriend who has recording space he lends to the Greenly twins for their podcast!) Really, it was hard for me not to be hooked on this story idea.

I like the struggle both teens have outside of love issues. Vada is dealing with an emotionally abusive and narcissistic father who happens to be the reason she has her love for music. Luke has all the skill and ability to be a famous musician, but absolutely hates the spotlight and popularity, something his family of extroverts cannot quite understand. The book focuses more on these issues rather than a ton of “BUT DOES HE LIKE ME?!” Rather, the romance building between the two is more of a “I think they like me, but I’m not going to try and rock the boat on this awesome budding friendship.” It isn’t a lack of communication that causes everything to go awry, it feels more of a natural love story.

That being said, I definitely enjoyed this book because of my ability to relate to Vada. Her relationship with her father rang very true in my head, though if it helps, my relationship has definitely improved with my own father as I’ve gotten older. And I do appreciate that no one actively tells Vada that he’s her father, she needs to give him infinite second chances, especially while Vada does struggle with that concept internally.

I did have a few issues with this book, as I do with most. There is a lot of church and religious chatter that I didn’t quite understand? Vada’s mom and best friend are both super religious, which just took me out of the book every time it is mentioned? I really worried there was going to be a “talk to Jesus about these problems with your dad and/or relationship with Luke” but there isn’t. It does serve as more of how her mom copes with her terrible dad, but it makes her best friend Meg come off more and more like a manic pixie dream girl.

And on Luke’s side, his twin brother is gay. He’s been dating the star athlete for ever, and it isn’t a thing in the school. Everyone loves them and is rooting for them. And we are told this repeatedly. Like the author really wanted to make sure you understand that everyone in this town is super cool with the head-power-couple is gay. Because did you know that his twin brother is gay and they’re homecoming kings together? It’s ….a lot. While I appreciate the attempt to normalize queer characters, it feels like it swung hard the opposite direction of I AM GOING TO MAKE SURE TO REPEATEDLY TELL YOU THIS IS SO ACCEPTABLE DID YOU REALIZE?

I also had some issues with the formatting of the book and the jump arounds….which is likely because it was an ARC rather than on the author. It did take me a few chapters to settle in with the author’s writing style….especially trying to figure out who Phil is.

I am so glad that there is officially a romance book between a podcaster and a blogger! I can’t wait to see more of this. This book also heavily relies on music (which my love of music is pretty bad compared to most?) and I was really glad to find out that there is a Spotify playlist!

If you need a cute romcom that feels a little more realistic, give this one a shot.

2 thoughts on “More Than Maybe by Erin Hahn”