You are fragile.
You can move mountains.
You are breakable.
You will never break.
This power is mine.
And now is it yours, too.

I have come to the strange conclusion in the last year that I enjoy middle grade and YA horror more than I enjoy adult horror books. There is something about them that I find scarier and darker, maybe because they lack the underlying despair that adult horror seems to have. Sawkill Girls  by Claire Legrand definitely secures that for me. 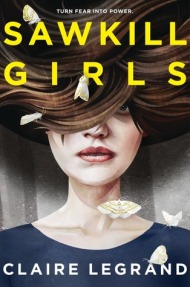 The island of Sawkill Girls is off the East Coast of the US where girls have been going missing for decades. There used to be years between the girls, but they’re starting to happen more and more frequently. Are they simply missing, or has something more sinister happened?

This book has three narrators, which is something that is always dangerous in my opinion. Having to blend three voices, while also making them quite distinct?

Marion Althouse — The town’s new girl. Her father just died, her mother just took a job as the Mortimer’s housekeeper, and Marion is the rock keeping her mom and sister Charlotte steady until her sister goes missing.

Zoey Harlow — The outcast, the daughter of the police chief and the best friend of the most recent girl who has gone missing, Thora. She’s also recently broken up with her boyfriend, Grayson. Lots of angst.

Val Mortimer — the queen of the island. The richest family’s daughter, a family with just a matriarchy line. Also been friends with the last few girls that have gone missing.

Holy cow this book! I was so apprehensive going into it — I absolutely adore the cover, but the author gave me pause. I didn’t like her Furyborn book, but that is okay — KEEP WRITING HORROR, CLAIRE!

I wasn’t sure if this book was going to be a Slenderman or just a fake paranormal book, but DEMONS THERE ARE DEMONS. There is a generations old pact with a demon! I was sold from the moment that became clear.

While this book is dark and involves several deaths and destruction, it also is incredibly feministic. Some of it is quite overt:

“Screw that book,” said Val. “It was written by men.” She held out her free hand to Marion. “We’re rewriting it.”

While some of it is layered in throughout the story. The richest family on the island is entirely made up of women. None of the fathers stick around (by the woman’s choice) and they only have daughters. Girls are the ones dying on the island, but maybe it is only up to girls to save them too.

A girl who burns, a girl who can vanish, and a girl with incredible strength. Always in threes.

These are girls who are trying to figure out what they want, they’re scared and raging and trying to be good friends while also trying to fall in love and fight a demon?

“What I’m saying,” Marion said, now looking right at Zoey, her gray eyes bright, “is that girls hunger. And we’re taught, from the moment our brains can take it, that there isn’t enough food for us all.”

The book is wonderfully atmospheric — the island is small without being too small. It is close-knit but still has outsiders, and also there are terrifying horses everywhere. Seriously, I already was terrified of horses, this book doesn’t help. It also has a mood of being unable to leave once you get on the island — Zoey is stuck because of the guilt of her dad, Val by her family, and Marion in order to find her sister. And maybe they can’t actually even leave? There are also dark and scary basements!!

Finally, what I love about this book is that it deals with some representation that you don’t normally find in main characters. Zoey fairly quickly lays out that she’s asexual without explicitly saying it, and while she IS trying to come to terms with that and what it means, along with a guy she has dumped but who she very much loves, but it is never shoehorned in. There is something more realistic about a horror story where the main characters are still trying to grapple with real things at the same time. Sexuality, feelings, growing up too soon to try to keep your family together — it’s all here.

Marion gazed over at her. In that moment, she was not a rock but a girl. Not a fatherless, sisterless daughter, but a living, breathing, selfish creature who wanted. Who craved. The rest? It could wait until tomorrow.

I checked this book out of the library, and it is one of the few I have turned around and debated buying right after finishing it. The cover is absolutely gorgeous, and the book is dark and atmospheric and DEMONS! But if you don’t like moths, maybe be weary of this book? I had a pet moth as a kid, but I know many people who don’t like them.

One thought on “Sawkill Girls: YA Horror at Its Finest”