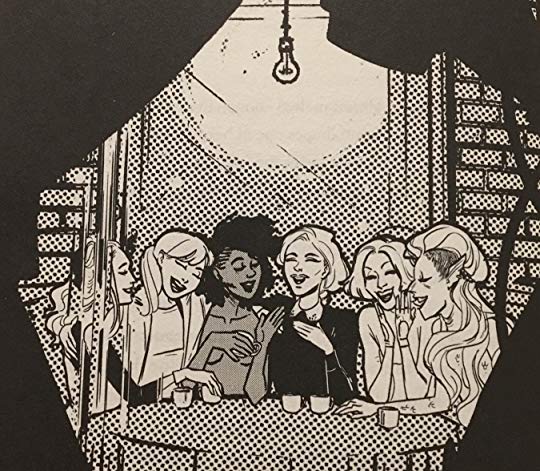 What’s the difference between being dead and having a boyfriend? Death sticks around.

It isn’t as fun as talking about sex (baaaby), but it is still incredibly unfortunate that in 2019, fridging women is a problem in pop culture. I’ve spent some time in some writing groups that are populated by men who STILL believe this is a viable trope. And even despite a contest existing for Thrillers in which no woman is beaten, stalked, sexually exploited, raped or murdered, it is STILL happening constantly.

Part of my frustration came during a chat about a woman’s death in a new popular show on Netflix and whether it is consider a fridging or not. The argument came down to whether or not the woman was killed by her own decisions or just because she was of value to a male character. Which – is a fair argument. I don’t want to discount that discussion at all, as in some ways, it is a bit different. But my frustration is more of the result of the tragedy – which is STILL just a plot point to further the man’s story.

Either way you decide on the fridging, I am tired of women dying – even if they do so bravely and by their own actions – just for the sake of progressing a dude’s story.

And to focus my frustration, I read The Refrigerator Monologues by one of my favorite authors, Catherynne Valente. Which, I then decided to wait until Women’s History Month to discuss.

As this is a short story collection, I’m going to go through each story briefly and then my overall thoughts. Fair warning though, this is not a happy collection, nor are there happy endings. These are dead women trying to tell their stories.

Also, apparently this is getting made into a series for Amazon, which I am totally on board.

Page Embry based on Gwen Stacy from Spiderman 4/5 Moose

Oh Page. Page, the overall narrator, the unofficial President of the Hell Hath Club. One of the oldest fridgings, one of the few to ever come out of Purgatory. And, given that the 2014 Spiderman movie was the inspiration for this collection, it is only fair that Page gets to tell her story first.

I loved Page’s story. It eases us in to a superhero world where things aren’t shiny 60’s innocent. These are women who are in love and do things that women in love do. Page is brilliant, her relationship seems to be as much of an equal partnership as you can get (especially in a superhero world), and she isn’t mad Kid Mercury has seemingly forgotten her. Overall, especially given the later stories, it is tame in its introduction to this club.

Julia made me cry from the get go. She has come to an agreement that she can have 15 minutes to herself a day – 15 minutes where she isn’t pulled back to some alternate time line or multiverse or reboot or whatever other exhausting thing Julia can be pulled back for. Because it’s only a matter of time. The idea of being driven mad after death – which is what this would do to someone easily – and having to demand her own private few minutes a day, which on this day she tells her story?

I was used and tricked and thrown away, but I cannot be forgiven. It’s a funny thing. You go your whole life thinking you’re the protagonist, but really, you’re just the backstory. The boys shrug and go on, they fight and blow things up and half of them do much worse… and still get a key to the city, and eventually you’re just a story your high school boyfriend tells the kid he had with his new wife.

And why? Because she had gotten too powerful. She was the first woman on her team and was meant to just become the first cosmic powerful female… but her teammates couldn’t take it. Was the cosmic entity (who shows her all the multiverses before her demise) really evil? Or were the men just unable to handle her being more?

Pauline Catch based on Harley Quinn from Batman – 3/5 Moose 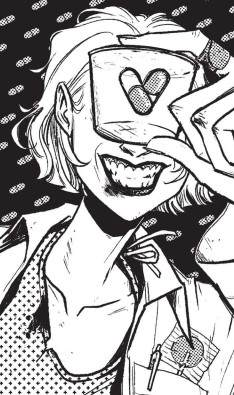 I’ll be honest, some of my dislike of this story comes from the voice actress. It is a bit much, even for a parody of Harley Quinn. “But, Meg,” so many of my friends have said, “Harley hasn’t been killed off.” No, but Harley has been abused and assaulted for the man she loves, switched sides to become evil for a man who will never love her. That’s all she is, or was for years. Just a lovesick side kick to the Joker. And again, parody book.

When she, Polly, gives Mr. Punch what he wants, he does kill her. After having made her absolutely insane from abuse and assault. And yet, Polly is still upbeat.

Bayou based on Mera from Aquaman – 5/5 Moose

While this story is absolutely heartbreaking, Bayou is the biggest bad ass. There is no other word from her. She knows who she is, inside and out, and she will share it all. And technically, she isn’t dead. She’s just visiting, looking for someone. And as you can tell with Julia Ash, when you are written to be too cool, too powerful, too much like a male superhero – you are doomed because they cannot handle it.

Never give up your voice for a man, you fucking guppy.

I read Bayou’s story while walking around at lunch. It starts off amusingly – Bayou trying not to laugh at the new guy’s face as he brags about being able to talk to fish, like that’s not common. But she still feels something for him, something that leads to a baby. But she’s still Bayou – the bad ass woman of the sea. And then she loses a child. And instead of receiving comfort and compassion, she’s left for a mental institution. Why? Because it is easier for him. He gets to put his anger over the child into vengeance, but a woman? Well that’s just not right.

Daisy based on Karen Page from Daredevil – 5/5 Moose

Oh man. I did not know much about Karen Page as a character, especially given that my only interaction with Daredevil is primarily through the Netflix show. (I think I saw the Ben Affleck movie, but I couldn’t tell you anything outside of “I liked the soundtrack as a kid.”)

Samantha Dane. The newest member to the club, who joins mid book. Her inspiration started a revolution…just not one in the comic. I haven’t read any of the Green Lantern comics, despite it being a favorite of one of my close friends. It takes an interesting turn (as they all do) and places the blame more on her super hero than the other stories seem to. It’s more like if he hadn’t gone down this path – this path that led to looking at the world more black and white and trying to be an authoritarian, she wouldn’t literally be in a fridge?

I belong in the refrigerator. Because the truth is, I’m just food for a superhero. He’ll eat up my death and get the energy he needs to become a legend.

Overall this book made me sad and frustrated, which is exactly what it is meant to do. These women who are sometimes stock stand-ins, but always punching bags, within their own series finally get to sit down and tell their stories. But either way, they are still dead. They don’t get to come back to the status quo, they don’t get to leave their resting place for long. And you can feel it in their stories. They aren’t trying to change the narrative. They just are…sharing experiences over some fake wine.

Deadtown is aesthetically gorgeous in its hellish landscape.  And you really feel like you are coming out of a story and back to this haunted world, especially as the day goes on. The gargoyles have roles, there is food and there isn’t (you have to wait for the human world to be done with it now) the music is slightly outdated, but it’s home.

I will point out that many reviews seem to have trouble relating to Valente’s writing, which I can understand. I personally love it, which might be why my rating comes across higher than some.

Finally, there are aspect of the comic community that we are doing better. More female and gender neutral creators are getting time to shine. Gwen Stacy finally gets to stretch her legs in Spider Gwen/Ghost Spider. Batman: White Knight has a healthy, sane Harley Quinn who GOT OUT. There is an Old Woman Harley comic that I’m curious about. Karen Page hasn’t been killed off the Daredevil tv show. And Jean Grey? Well, it’s time to let her rest in peace.

There are strides being made It has been twenty years since Gail Simone started the Women in Refrigerator web page, and it has done so much good. And hopefully, in my cynically optimistic way, we can do better.